Industrial clusters are, by definition, a concentration of related industries or several industrial sites that are grouped within proximity to one another. Porter’s definition of clusters encompasses the institutional ties between geographically proximate and functionally integrated companies or between companies and other stakeholders. This represents the entire process in each industry from suppliers to end products, including supporting services and specialized infrastructure, transportation and shipping.

The UK is a world leader in the fight against climate change. In 2019 the UK became the first major economy in the world to pass laws to end it's contribution to global warming by 2050. Reaching this target will require extensive, systematic change across all sectors, including industry. There are many industrial areas of the UK that are still reliant on fossil fuels, but the introduction of Zero Carbon hubs in the flowing industrial clusters: The Black Country, Humberside, South Wales, Grangemouth, Teesside, Merseyside and Southampton have set the goal to create the world’s first net-zero carbon industrial cluster by 2040 and at least four Low Carbon clusters by 2030. This will drive the UK to the forefront of the green industrial revolution by developing the Low Carbon technologies, services and systems needed to address climate change on a global scale.

A net-zero industrial hub will see all industries in a region collectively reducing their carbon dioxide emissions to as close to zero as possible using Low Carbon energy sources and new technology like carbon capture and storage. This proven technology can be used in different sectors – including power and heat generation, heavy industry, bioenergy, waste-to-energy, hydrogen production and could deliver “negative emissions”, whereby the amount of CO2 already in the atmosphere is reduced. Currently, industry accounts for around 25% of all greenhouse gas emissions in the UK, with more than two-thirds of these industrial emissions coming from energy intensive industries which are often located next to each other in clusters. Energy use accounts for 80-90% of an industrial organisation’s CO2 emissions. If the UK is to meet its decarbonisation obligations for 2050, energy-intensive industries will need to significantly reduce their CO2 emissions. Business and Energy Secretary Kwasi Kwarteng said, “We were the first major economy to put into law our target to end our contribution to climate change, and today we’re taking steps to be the first major economy to have its own low-carbon industrial sector.” 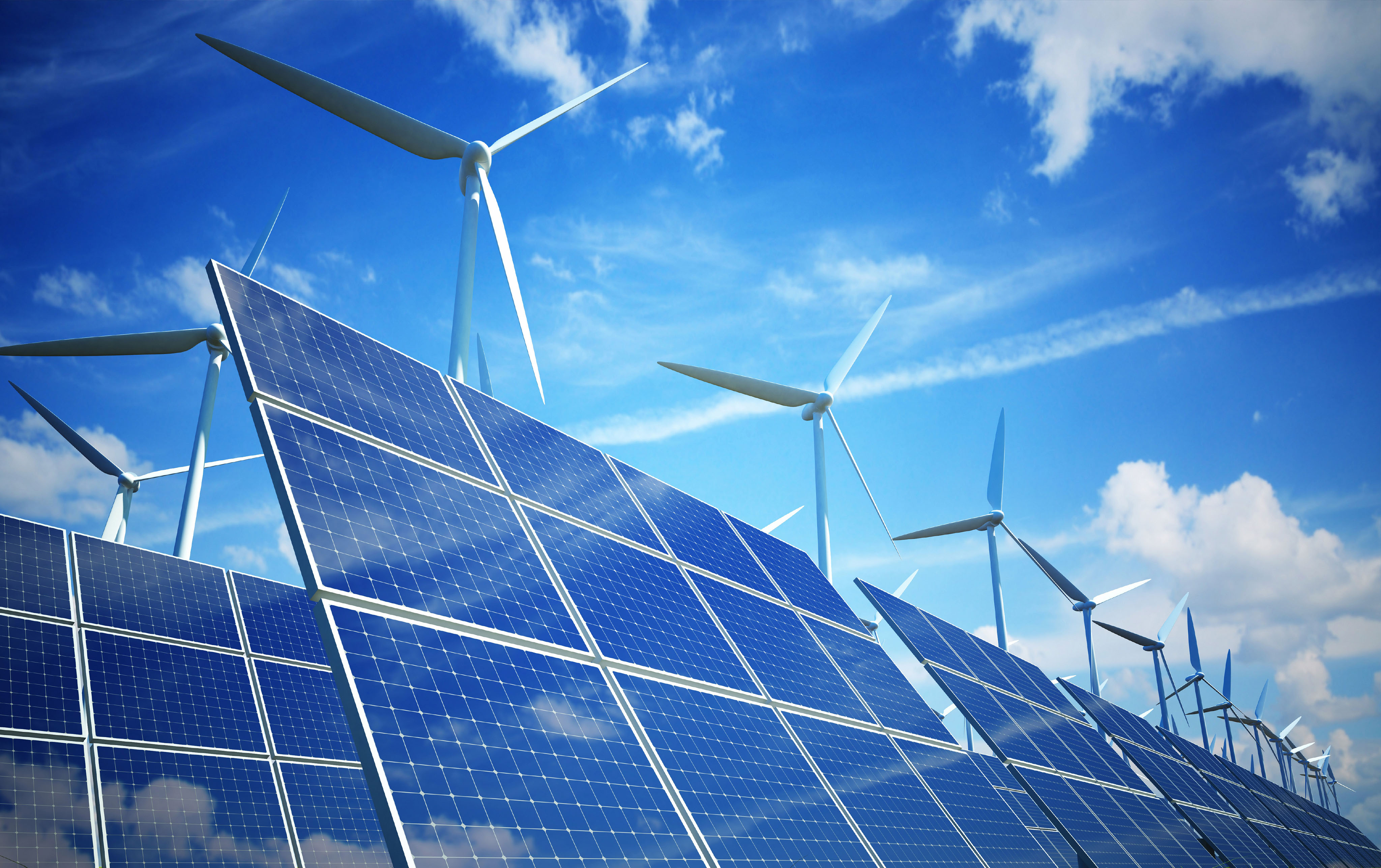 CO2 Emissions broken down by regions across the UK in 2018

The Black Country is the world’s first modern industrial cluster with metal processing still the biggest sector of the local economy. The Black Country Industrial Cluster consists of over 3000 energy-intense manufacturing businesses spread across the four metropolitan areas of Wolverhampton, Walsall, Sandwell and Dudley.The Black Country Cluster is distinctive amongst all UK clusters. It is not only the largest it is also the only non-coastal cluster, spreading deep into the urban areas surrounding it. Industry across the Black Country is so integrated into residential areas making it challenging to manage industrial and domestic energy demand separately.

Aerial view of the Black Country 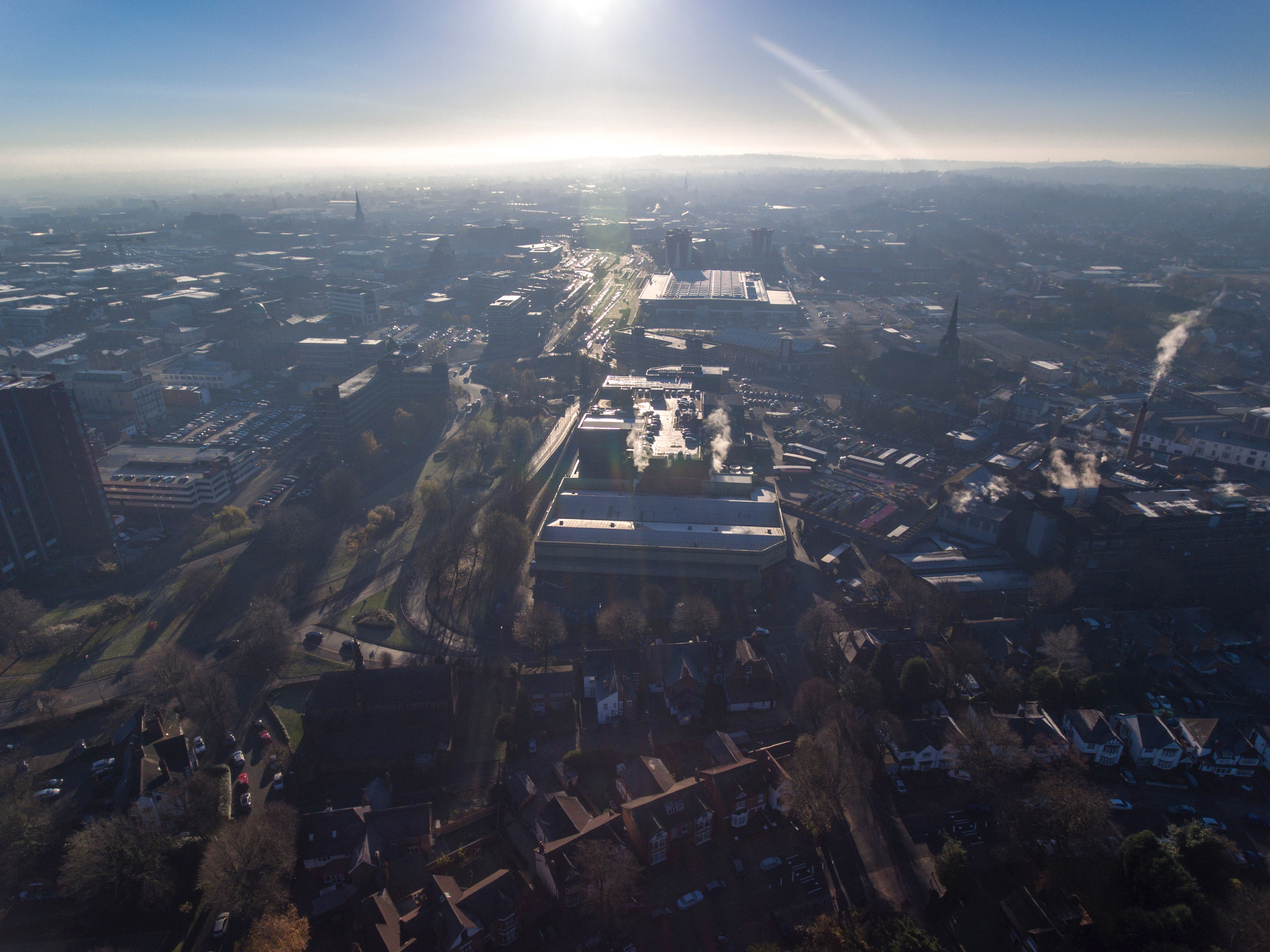 Tom Westley DL, Chair, Black Country LEP said “Repowering the Black Country sets out a vision for clean economic growth drawing on the latest innovations in supply chain and manufacturing thinking and in clean energy technology. Once again it points to a path the rest of the country can follow,” with regard to the decarbonisation plans for The Black Country. The Black Country Industrial Cluster will be implementing strategies in all industries in the region to collectively reduce their carbon dioxide emissions to as close to zero as possible using Low Carbon energy sources and new technology like carbon capture and Zero Carbon hubs. Zero Carbon hubs will be based around anchor industrial processes, strategically selected to match Black Country skills and strengths. Each hub will contain a mix of businesses carefully selected to compliment each other by thinking about their energy and waste flows. It is this collective collaboration that will transform the way carbon emissions are reduced by potentially eliminating the waste by-products from each industry in the hub, creating a circular zero carbon-minimal waste collective. The Zero Carbon hub will be the first of its kind and will provide workable solutions to the issue of climate change by achieving net-zero carbon emissions.

In 2019, Scotland made its commitment to achieving net-zero greenhouse gas emissions by 2045, in line with the UK Committee on Climate Change (CCC) recommendations. This commitment will require the decarbonisation of all sectors, including industry. To support this goal, the UK Government and Innovate UK established an Industrial Strategy Challenge Fund. This is supporting initiatives across six UK regions to develop roadmaps for the decarbonisation of industrial clusters.

The focus of this cluster is a refinery complex for chemical products and Scotland’s only crude oil refinery. Scotland’s net-zero infrastructure project that would gather CO2 from industrial emitters around the Grangemouth refining and petrochemicals complex and link it to the Acorn CCS (Carbon Capture and Storage) project via pipelines to St Fergus in Aberdeenshire. 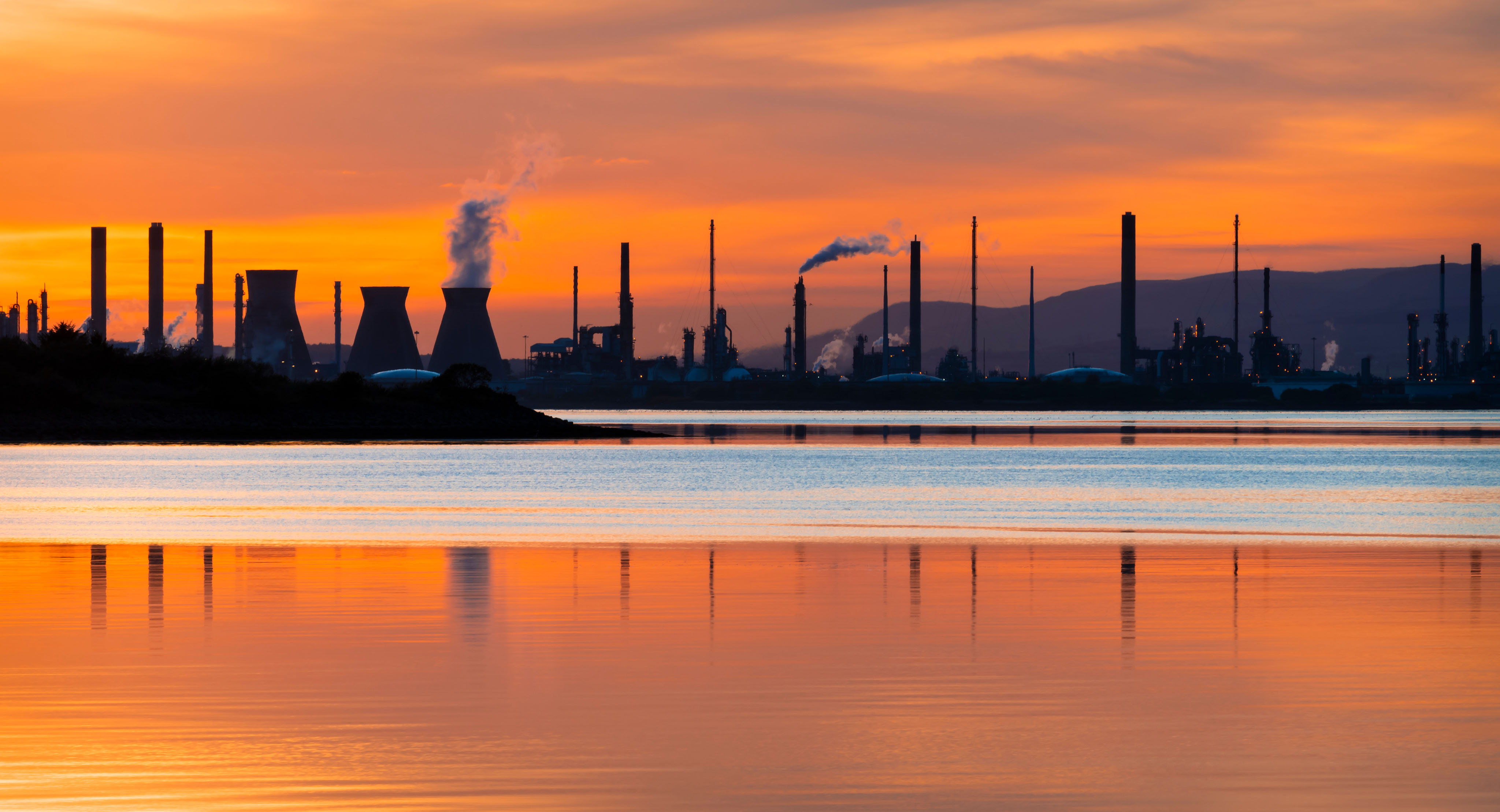 Carbon capture and storage (CCS) also presents an opportunity to mitigate the damaging effects of greenhouse gases. The project will investigate the feasibility of a CO2 collection network to securely capture, transport and store carbon dioxide emissions deep underground. 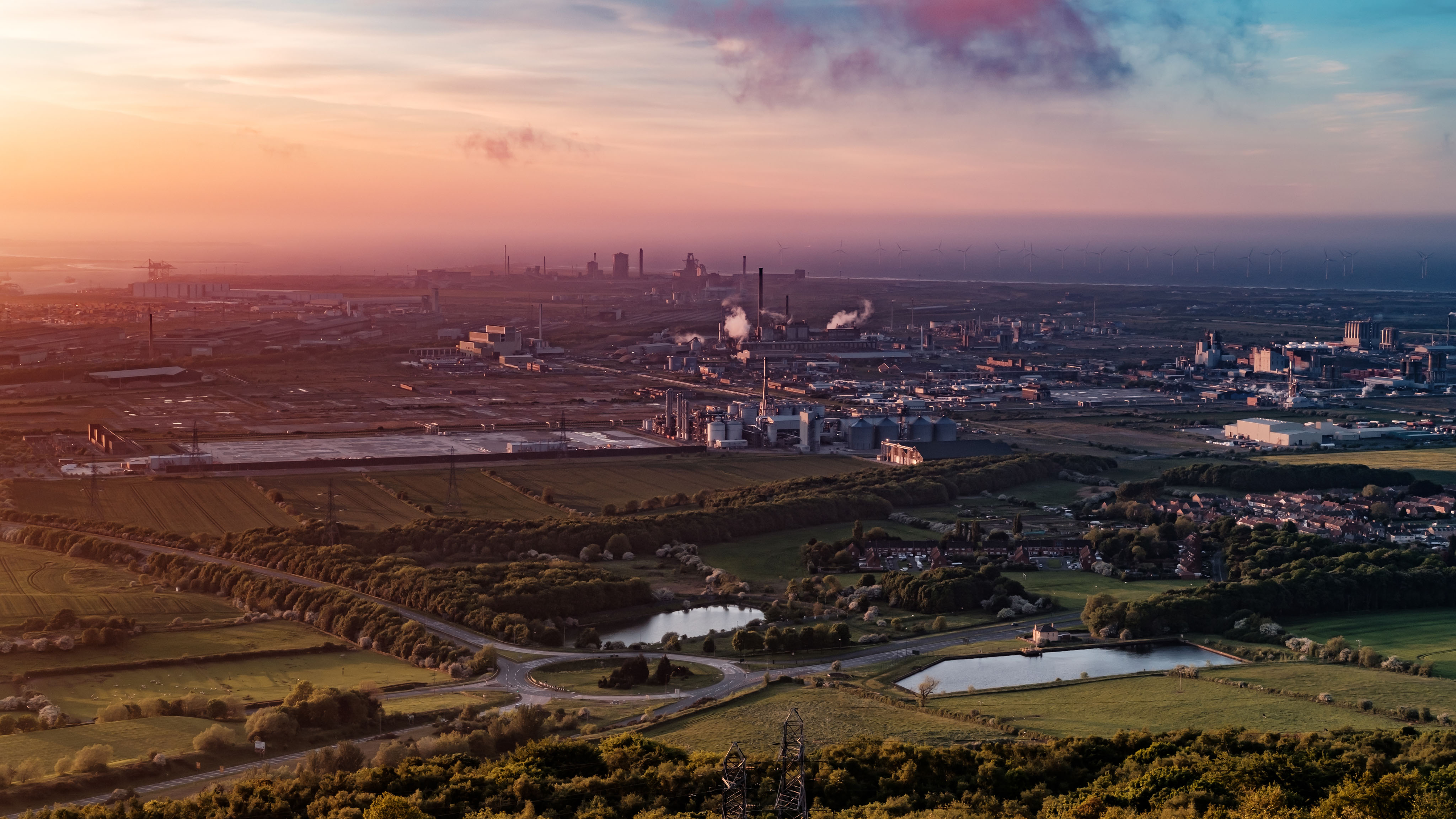 The Teesside industrial cluster is one of the UK’s most densely clustered sites, consisting of manufacturing industries. With its rich heritage in Iron and Steel and more recently by becoming Europe’s first integrated modern chemical plant makes the Teesside cluster the perfect hub to implement a Carbon Capture, Utilisation and Storage (CCUS) project. Teesside is the second largest carbon emitting region in the country and plans to reduce the cluster's combine Carbon Footprint sustainably and sensibly. The future includes decarbonising a cluster of carbon-intensive businesses, then moving onto “clean hydrogen” production while using carbon capture and storage technology.

The net-zero Teesside project includes plans to build a new gas fired power station with state-of-the-art carbon capture technology to provide Low Carbon power as a stable energy source. The project plans to capture up to 10 million tonnes of carbon dioxide emissions, transport it and then compress the gas to be stored underground in one of the Carbon Capture Storage facilities off the North East coast. This project will be the key to unlocking the long-term benefits of carbon capture, utilisation and storage and represents a major infrastructure investment for Teesside and the UK.

The Humber region emits more carbon dioxide than any other UK industrial cluster – 50% more than the next largest – thus providing them with the largest opportunity to reduce the countries overall carbon emissions.  The Humber area is one of the most vulnerable to climate change through more frequent extreme weather events, sea level rise and increasing average temperatures. To minimise the effects of climate change on the Humber area, plans have been put into action to harness the collaborative power of regional industry which will flagship the way forward to a Low Carbon future by achieving large-scale decarbonisation. David Talbot, CEO of CATCH, said: “There is a huge appetite for change in the Humber region and a great deal of collaboration is already taking place.” 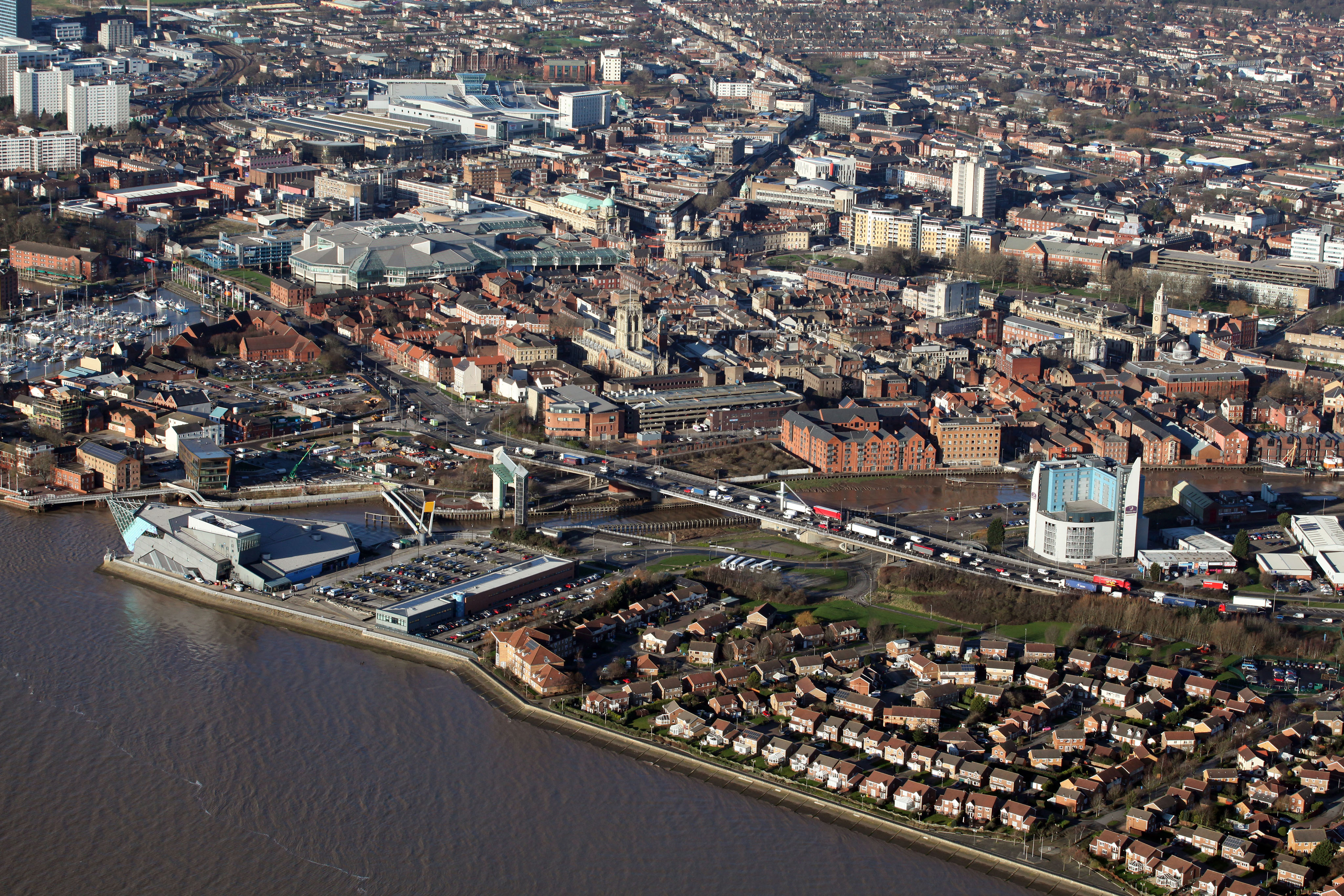 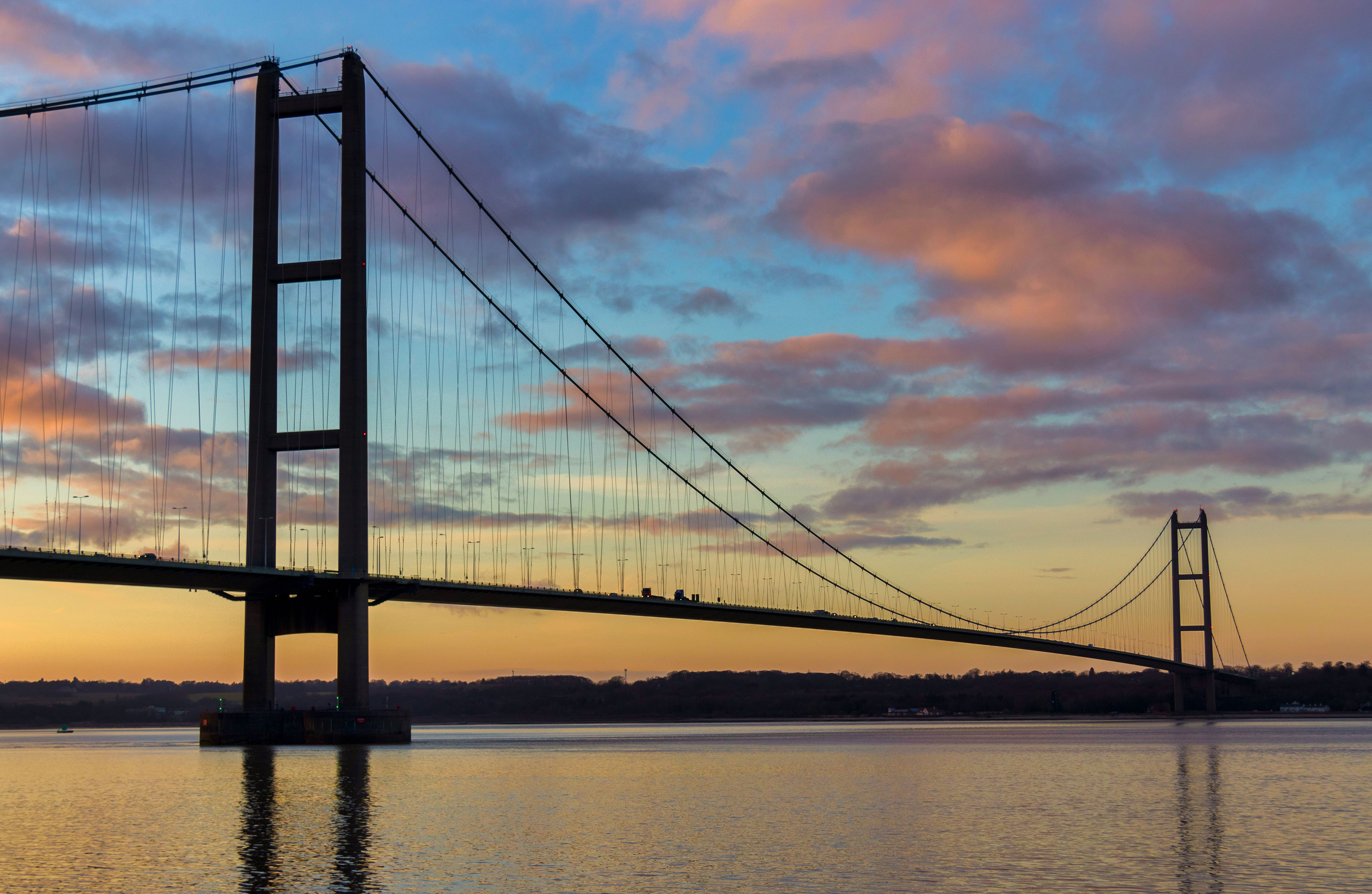 Carbon dioxide from the Humber Industrial cluster will be captured at an industrial scale from power generation, fuel production and industrial processes around the region. This will be transported via pipelines to be permanently and safely stored offshore under the North Sea. The project will move the Humber region closer to achieving large-scale decarbonisation, with businesses across the Humber region working to find effective and lasting solutions. The Humber Industrial cluster could become one of the world’s first at-scale Low Carbon hydrogen production plants, with a carbon dioxide and hydrogen pipeline network connecting to industrial sites, gas and biomass power stations throughout the Humber region, enabling them to capture their carbon dioxide emissions or switch to Low Carbon hydrogen.

Industry in the South Wales cluster currently produces almost nine million tonnes of carbon dioxide each year – around 12% of UK industry’s total. The South Wales Industrial Cluster will therefore help to significantly reduce emissions, improving air quality and opening up opportunities for South Wales to become a leader in decarbonised industrial and economic growth. By implementing new technologies to prevent the release of emissions into the atmosphere the South Wales Industrial cluster hopes to create more job opportunities, sustainable growth in the industrial sector and reduce its impact on the environment, leaving a cleaner, better environment for the people. The move to net-zero involves engineering studies to explore the routes to decarbonisation, including the use and production of a hydrogen supply, carbon capture usage and storage (CCUS) and carbon dioxide shipping from South Wales. 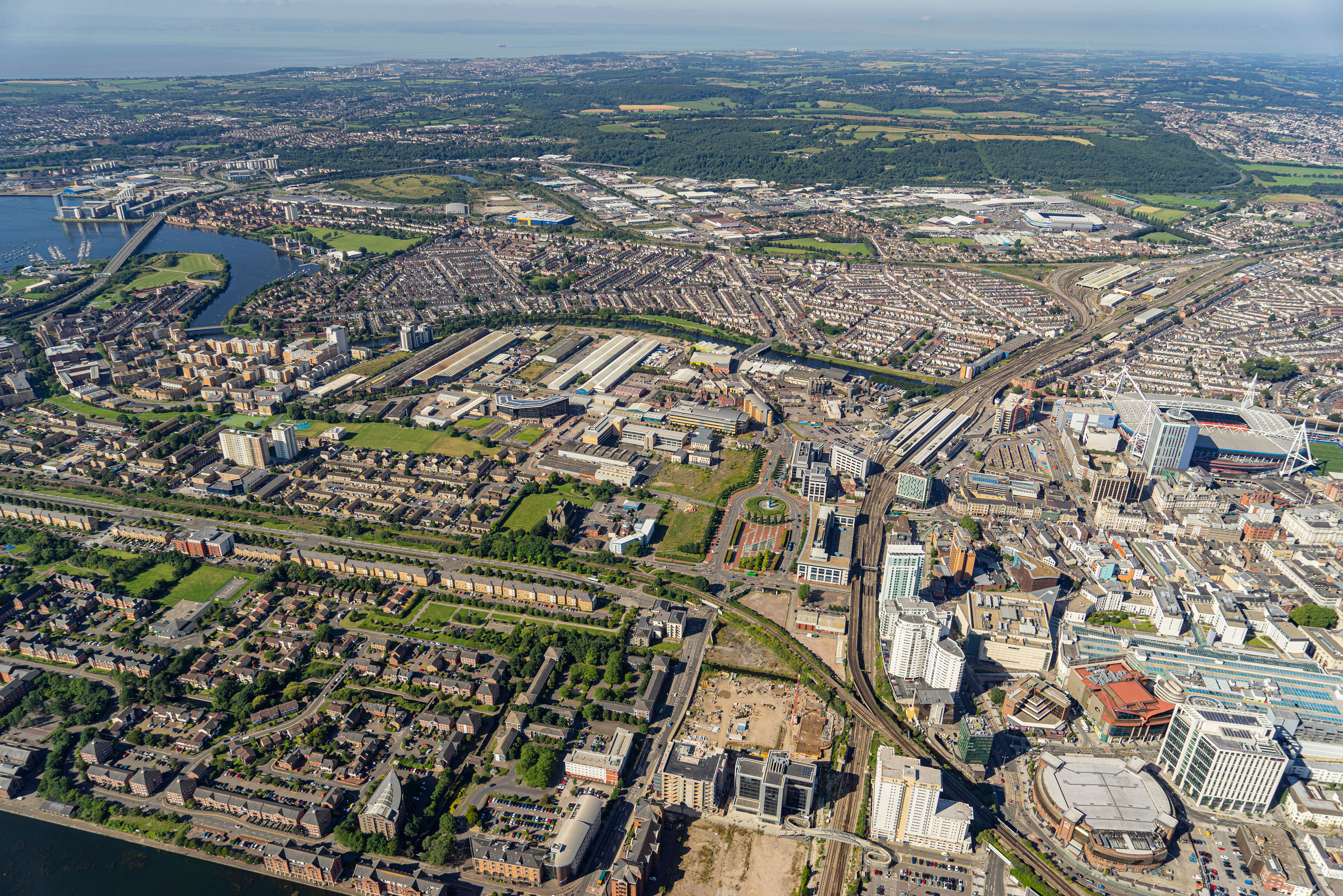 Which would be the first carbon dioxide shipping industry in the whole of the UK and would create an entire new industry for the region. This will enable the UK to manufacture low or net-zero carbon cement and steel products, helping to enforce the Low Carbon future of construction as well as many other sectors including defence and car manufacturing. 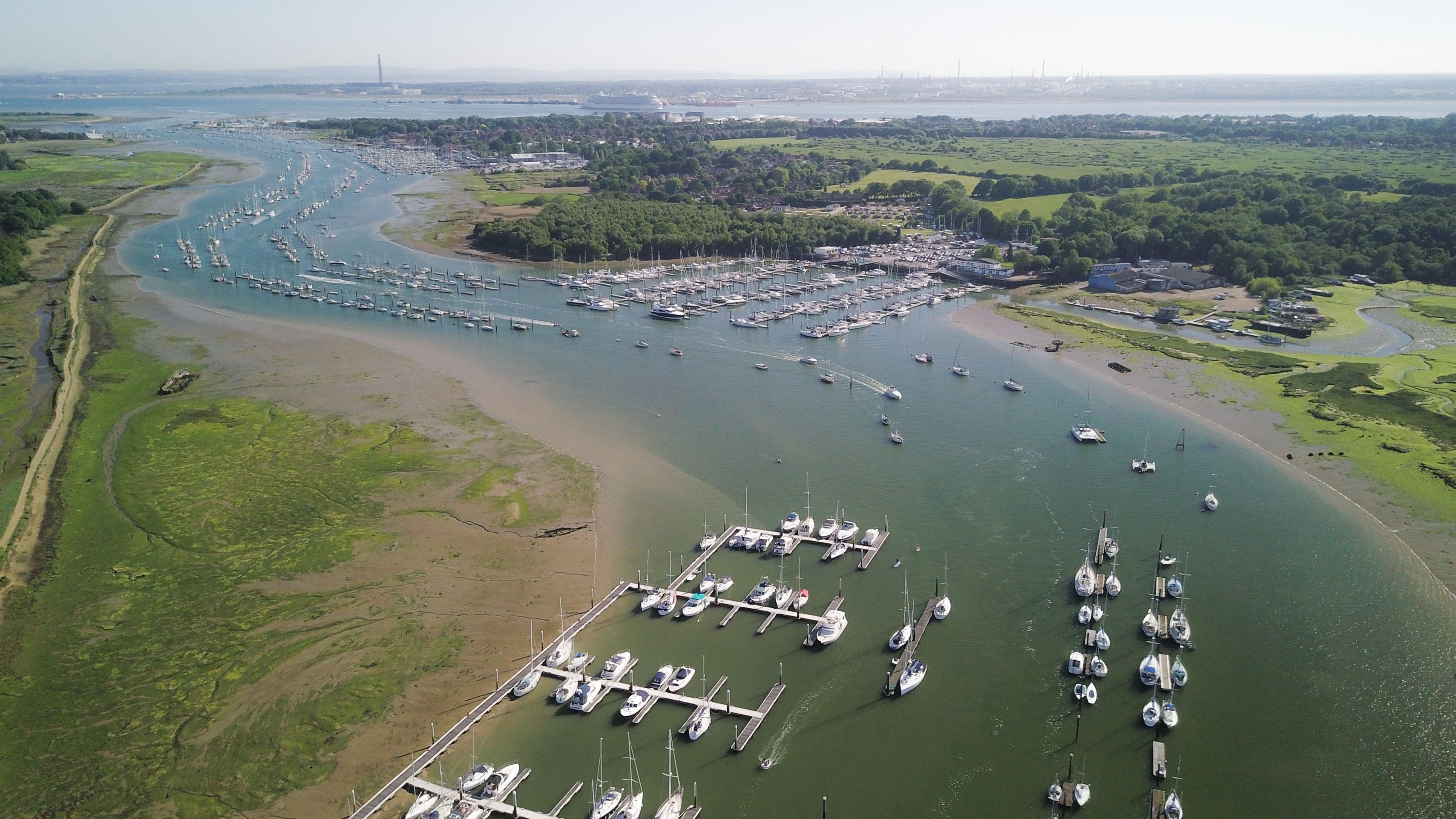 Aerial view of boats on the river Hamble, Southampton, UK

Southampton is one of six major industrial clusters identified by the UK government with a diverse mix of large energy users, heavy transport needs and one of the UK’s largest and busiest ports. Southampton’s industrial cluster could potentially become the gold standard for hydrogen production and distribution, with its investigation and study into carbon capture and hydrogen-based technologies. Gus McIntosh, director of energy futures at SGN, said: “We’re at the forefront of hydrogen exploration and Southampton could easily become a world benchmark for decarbonising whole industrial areas. That would bring cleaner air, large numbers of jobs, and new economic opportunities in hydrogen production and export.”

Once the Southampton hub is established, it could provide a platform to decarbonise transportation, manufacturing and domestic heating in the south of England. The Southhampton hub will play an important role in delivering Southampton’s commitments as set out in its Green City Charter. Assets and infrastructure already in place, such as pipelines and heavy transport, make the area an ideal starting point for the introduction of hydrogen in the south. 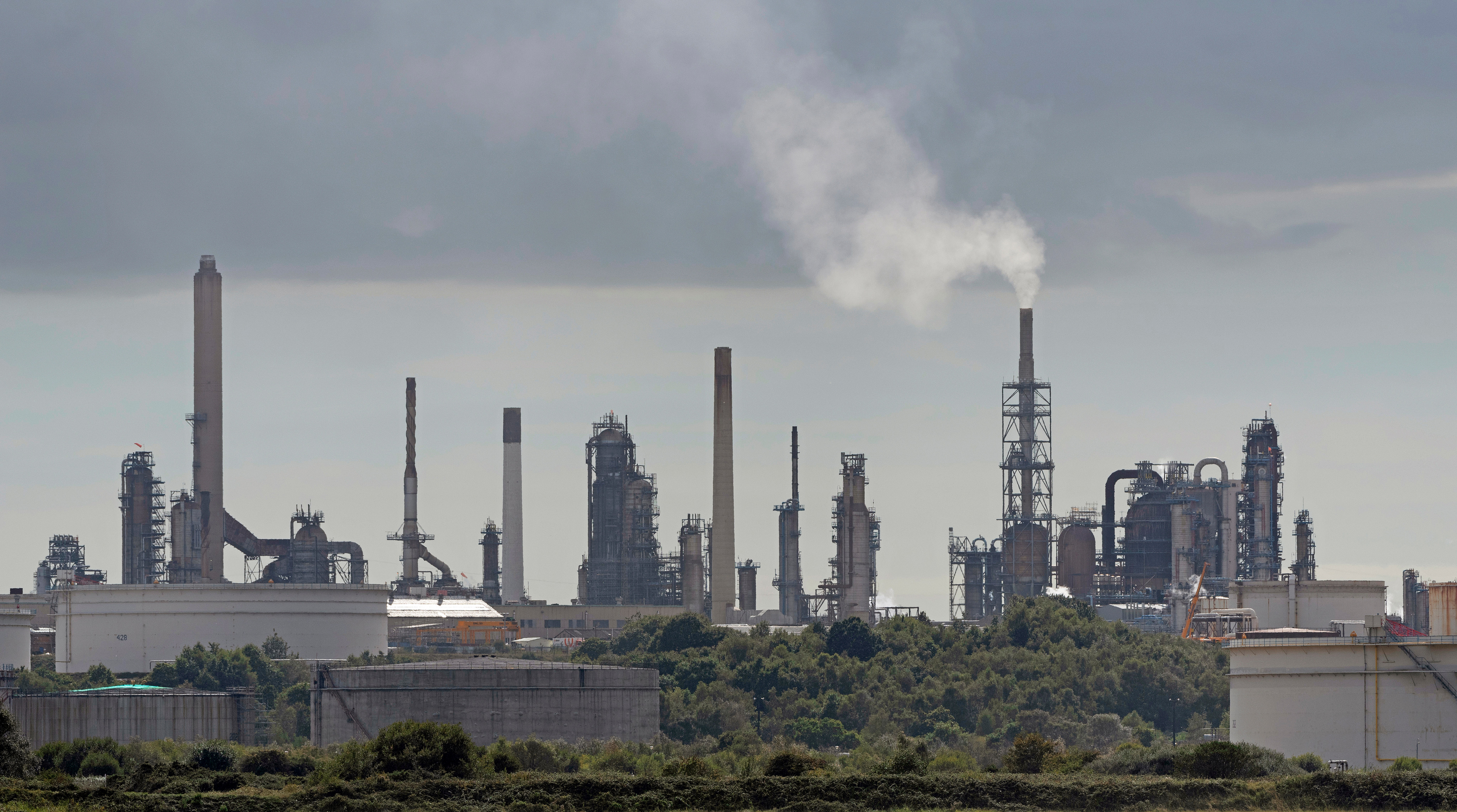 The high tidal range in Liverpool Bay and the Mersey estuary provides a unique opportunity to generate stable, reliable renewable energy, using the construction of a barrage across the River Mersey to capture tidal waters which can then be used to power turbines. In addition to this a comprehensive “Cluster Plan” has been developed, which will feature both hydrogen and CCUS technologies, as part of an effort to prepare Merseyside for a net-zero future and will be implemented as part of the government's “Ten-point Plan for a green industrial revolution”. Progression of the “Cluster Plan” over the next decade will ‘lock-in’ long term, Low Carbon generation for the urban and industrial area drastically reducing the carbon emissions in the cluster.

We use cookies to ensure that we give you the best experience on our website. If you continue to use this site we will assume that you are happy with it.